This is a follow up article on toilet awareness that I would now call toilet learning. You might notice we don’t use the expression toilet training – which makes me think of a bootcamp of some kind or a dog class. This is not what we do here honestly. We take each child as they are and take the time with them, during their sensitive period to address the toilet, the underwear, the pee and poop that goes now in the toilet/potty instead of the diaper.

I had talked about the first phase so I will dive into the 2nd phase, the one everybody wants to know or stress about. We, personally, don’t stress about it because there is nothing to stress about unless you have some major anxiety around excrement. It might not be the most fun part of your child growing up but honestly, it’s as bad as we let it be and how we react to it. It’s a major milestone but not a big deal. No reward or punishment necessary.

Around 18 months, as our daughter had been in cloth diaper since birth and she knew how to tell us about being wet, we started talking about how we would (in a near future) not have diapers and would wear underwear like adults do.

We made sure to offer the potty/toilet on a more regular basis before she would ask so the pee would more often go in the potty than in the diaper. Then, over the Easter break, when she was 20 months, we just put all the diapers away and brought in the brand new underwear. In our case they are organic cotton training pants that are slightly thicker in the middle part so some of the pee is caught in it. It does help the child feeling the wetness and sometimes they can stop and make it to the toilet to finish, if not, the pee will be partly caught making the mess a little less big to clean up. They are also easy to put on and off for your toddler to be independent going to the toilet.

We did set a timer every 45 mins for the first week or so and then would wait 1 hour to let her hold it longer or for her to feel it and let us know she needed to go. Honestly, it has been going great. We do have accidents at times (when she is tired, or the schedule is out of the routine) and it took an extra 2 months for her to feel like poo could also go in the potty and not in the underwear. No worries, this is pretty normal to tackle pee before poop.

Since about 22-23 months, she is able to say it or go by herself. At 25 months, all poo are in the potty or toilet and pee as well (except for bad days).

We basically explained (and read a book about it) and switched from diapers to underwear. We use pull ups for nap and bedtime so she is independent putting it on and off. The difference to her was not that big because she had been preparing for this for a long time. We keep about 7 pairs of cotton underwear in the basket. At the end of day or when an accident happen, she takes off her underwear by herself and puts it in a pail we have in the bathroom. Then, she takes another one or take a pull up to go to bed.

She also have the choice to use the toilet instead of potty and we respect her choice. Eventually, the potty will phase out and she will go only on the toilet, like our students do.

Children can use the adapter when going onto the big toilet.

Children are also asked to wash their hands every time they use the bathroom. It makes for a more hygienic way of life. We ask this from girls and boys.

I hope your journey into toilet learning is stressless and can be appreciated like the milestone it is.

Tell us about your journey !! If you have any more questions, feel free to ask. 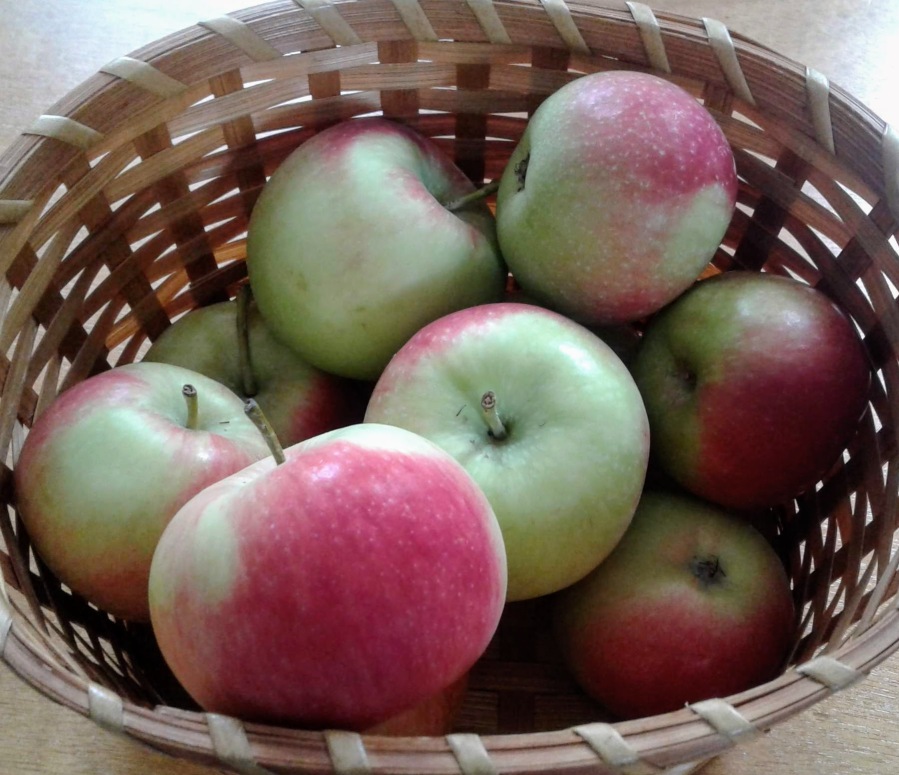 after a summer full of visits from family, here we are, back into the school year.

The temperatures have lowered, we lived with the consequences of Hurricane Dorian for a few days and I remember to be grateful that we are all safe and ready for a new school year.

Children are back to a regular schedule and with the 3-hour work cycle comes also the careful picking of the books displayed for the children. I think September has its own perks because we can talk about apples and the soon-to-arrive Autumn equinox. It is pretty exciting. So here is what is happening in our school:

Two of our students at work cutting apples before placing them in the slow cooker.

This is all possible at home with your child(ren) as well. Why not picking apples in an orchard as well over the weekend?!